You are using an unsupported browser

You are using an unsupported browser. This web site is designed for the current versions of Microsoft Edge, Google Chrome, Mozilla Firefox, or Safari.

The Office of the Federal Register publishes documents on behalf of Federal agencies but does not have any authority over their programs. We recommend you directly contact the agency responsible for the content in question.

If you have comments or suggestions on how to improve the www.ecfr.gov website or have questions about using www.ecfr.gov, please choose the 'Website Feedback' button below.

Content Feedback
If you have questions for the Agency that issued the current document please contact the agency directly.

Welcome to the new eCFR! Check out our Getting Started guide to make the most of the new site.
Sign In / Sign Up

The Electronic Code of Federal Regulations

Enhanced content is provided to the user to provide additional context.

Learn more about the eCFR, its status, and the editorial process.

State and local governments shall collect ambient air quality data at any SLAMS station on the following operational schedules:

(a) For continuous analyzers, consecutive hourly averages must be collected except during:

(2) Periods of instrument calibration, or

(3) Periods or monitoring seasons exempted by the Regional Administrator.

(b) For Pb manual methods, at least one 24-hour sample must be collected every 6 days except during periods or seasons exempted by the Regional Administrator.

(c) For PAMS VOC samplers, samples must be collected as specified in section 5 of appendix D to this part. Area-specific PAMS operating schedules must be included as part of the PAMS network description and must be approved by the Regional Administrator.

(i) Manual PM2.5 samplers at required SLAMS stations without a collocated continuously operating PM2.5 monitor must operate on at least a 1-in-3 day schedule unless a waiver for an alternative schedule has been approved per paragraph (d)(1)(ii) of this section.

(ii) For SLAMS PM2.5 sites with both manual and continuous PM2.5 monitors operating, the monitoring agency may request approval for a reduction to 1-in-6 day PM2.5 sampling or for seasonal sampling from the EPA Regional Administrator. Other requests for a reduction to 1-in-6 day PM2.5 sampling or for seasonal sampling may be approved on a case-by-case basis. The EPA Regional Administrator may grant sampling frequency reductions after consideration of factors (including but not limited to the historical PM2.5 data quality assessments, the location of current PM2.5 design value sites, and their regulatory data needs) if the Regional Administrator determines that the reduction in sampling frequency will not compromise data needed for implementation of the NAAQS. Required SLAMS stations whose measurements determine the design value for their area and that are within ±10 percent of the annual NAAQS, and all required sites where one or more 24-hour values have exceeded the 24-hour NAAQS each year for a consecutive period of at least 3 years are required to maintain at least a 1-in-3 day sampling frequency until the design value no longer meets these criteria for 3 consecutive years. A continuously operating FEM or ARM PM2.5 monitor satisfies this requirement unless it is identified in the monitoring agency's annual monitoring network plan as not appropriate for comparison to the NAAQS and the EPA Regional Administrator has approved that the data from that monitor may be excluded from comparison to the NAAQS.

(iii) Required SLAMS stations whose measurements determine the 24-hour design value for their area and whose data are within ±5 percent of the level of the 24-hour PM2.5 NAAQS must have an FRM or FEM operate on a daily schedule if that area's design value for the annual NAAQS is less than the level of the annual PM2.5 standard. A continuously operating FEM or ARM PM2.5 monitor satisfies this requirement unless it is identified in the monitoring agency's annual monitoring network plan as not appropriate for comparison to the NAAQS and the EPA Regional Administrator has approved that the data from that monitor may be excluded from comparison to the NAAQS. The daily schedule must be maintained until the referenced design value no longer meets these criteria for 3 consecutive years.

(iv) Changes in sampling frequency attributable to changes in design values shall be implemented no later than January 1 of the calendar year following the certification of such data as described in § 58.15.

(2) Manual PM2.5 samplers at NCore stations and required regional background and regional transport sites must operate on at least a 1-in-3 day sampling frequency.

(3) Manual PM2.5 speciation samplers at STN stations must operate on at least a 1-in-3 day sampling frequency unless a reduction in sampling frequency has been approved by the EPA Administrator based on factors such as area's design value, the role of the particular site in national health studies, the correlation of the site's species data with nearby sites, and presence of other leveraged measurements.

(e) For PM10 samplers, a 24-hour sample must be taken from midnight to midnight (local standard time) to ensure national consistency. The minimum monitoring schedule for the site in the area of expected maximum concentration shall be based on the relative level of that monitoring site concentration with respect to the 24-hour standard as illustrated in Figure 1. If the operating agency demonstrates by monitoring data that during certain periods of the year conditions preclude violation of the PM10 24-hour standard, the increased sampling frequency for those periods or seasons may be exempted by the Regional Administrator and permitted to revert back to once in six days. The minimum sampling schedule for all other sites in the area remains once every six days. No less frequently than as part of each 5-year network assessment, the most recent year of data must be considered to estimate the air quality status at the site near the area of maximum concentration. Statistical models such as analysis of concentration frequency distributions as described in “Guideline for the Interpretation of Ozone Air Quality Standards,” EPA-450/479-003, U.S. Environmental Protection Agency, Research Triangle Park, NC, January 1979, should be used. Adjustments to the monitoring schedule must be made on the basis of the 5-year network assessment. The site having the highest concentration in the most current year must be given first consideration when selecting the site for the more frequent sampling schedule. Other factors such as major change in sources of PM10 emissions or in sampling site characteristics could influence the location of the expected maximum concentration site. Also, the use of the most recent 3 years of data might, in some cases, be justified in order to provide a more representative database from which to estimate current air quality status and to provide stability to the network. This multiyear consideration reduces the possibility of an anomalous year biasing a site selected for accelerated sampling. If the maximum concentration site based on the most current year is not selected for the more frequent operating schedule, documentation of the justification for selection of an alternative site must be submitted to the Regional Office for approval during the 5-year network assessment process. Minimum data completeness criteria, number of years of data and sampling frequency for judging attainment of the NAAQS are discussed in appendix K of part 50 of this chapter. 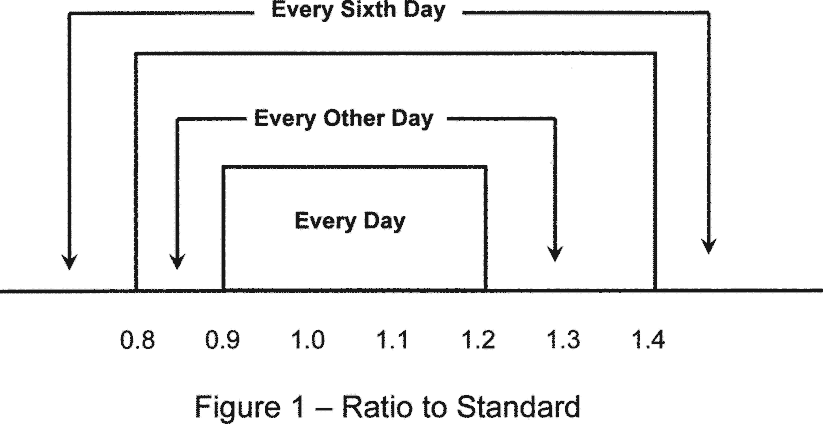 (1) Manual PM10-2.5 samplers at NCore stations must operate on at least a 1-in-3 day schedule at sites without a collocated continuously operating federal equivalent PM10-2.5 method that has been designated in accordance with part 53 of this chapter.

(g) For continuous SO2 analyzers, the maximum 5-minute block average concentration of the twelve 5-minute blocks in each hour must be collected except as noted in § 58.12 (a).